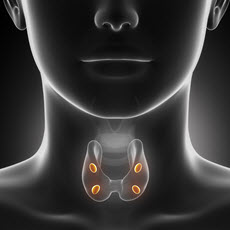 There are 4 tiny parathyroid glands in the neck, near or attached to the back side of the thyroid gland.

When one or more of the parathyroid glands grow larger, it leads to too much PTH. Most often, the cause is not known.

~The disease is most common in people over age 60, but it can also occur in younger adults. Hyperparathyroidism in childhood is very unusual.

Women are more likely to be affected than men.

~Radiation to the head and neck increases the risk.

~Some genetic syndromes (multiple endocrine neoplasia I) make it more likely to have hyperparathyroidism.

~In very rare cases, the disease is caused by parathyroid cancer.