Epilepsy is a group of neurological conditions consisting of recurrent, usually unprovoked epileptic seizures. Epileptic seizures have recently been defined as "a transient occurrence of signs and/or symptoms due to abnormal, excessive or synchronous neuronal activity in the brain". Epilepsy is one of the most common disorders of the brain, with one in 10 people suffering at least one seizure in their lifetime. There are over 40 different types of epilepsy, each of which presents with its own unique combination of seizure type, typical age of onset, EEG findings, treatment, and prognosis. 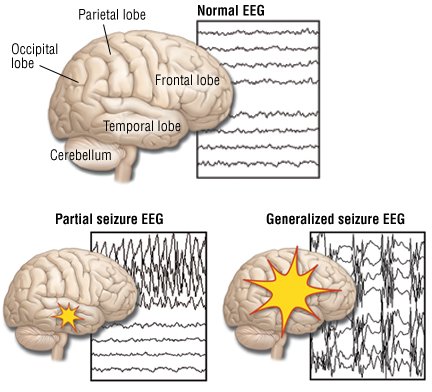 Epileptogenesis is the mechanism by which an epileptic condition is acquired, the critical step of which is neuronal damage. An initial brain-damaging insult triggers a cascade of molecular and cellular changes that ultimately leads to the occurrence of spontaneous and recurrent seizures. The initial insult does not begin the process, but sets into motion a cascade of changes in gene expression that alters the molecular and cellular constituents of neuronal and glial networks. There is often a long latency period, sometimes decades, between initial insult and the first seizure, and such insults include birth trauma, febrile seizures and encephalitis.

Once epileptogenesis has occurred, there are multiple complex mechanisms that trigger recurrent seizures. Simplistically, seizures arise when there is a disruption in the systems that normally control the balance of glutamatergic excitation and GABAergic inhibition. Disturbances can occur through a vast array of mechanisms. Control of the resting potential of neurons is critical to prevent the excessive discharge that is often associated with seizures. The sodium-potassium ATPase is vital in maintaining the resting potential and blockade or mutation of this ion pump can lead to seizures. In order for a seizure to occur, the activity of a network of neurons, not just a single cell, must be altered. Cell synchronization can be achieved through glutamatergic interconnections, gap channels and GABAergic connections. Many of the changes during epileptogenesis promote cell synchronization, and this represents a mechanism by which seizures become recurrent. Environmental changes can trigger seizures, including circadian changes in hormones, peptides and other neuromodulators, stressful life events and visual stimuli. Normally, changes in the above would not trigger seizures, however, in a brain that has already been altered by epileptogenesis, there is an underlying state of increased excitability and these everyday stimuli can have a proconvulsant effect.

Epilepsy can be controlled pharmacologically with anticonvulsant drugs. The main targets of current anticonvulsants include voltage-gated sodium channels, the GABA inhibitory system (including benzodiazepines) and voltage-gated calcium channels. Due to the diverse mechanisms by which seizures occur, epilepsy is refractory to treatment in a number of causes. There is therefore intense research into the development of novel antiepileptic agents.