Parkinson's disease (PD) is a degenerative disease of the central nervous system that often impairs motor skills, speech, and other functions. Symptoms of the disease include resting tremor, bradykinesia and rigidity. The primary symptoms are the result of decreased stimulation of the motor cortex by the basal ganglia, normally caused by the insufficient formation and action of dopamine, which is produced in the dopaminergic neurons of the brain. Symptoms of the disease appear once 50-80% of dopamine neurons have died. Parkinson's disease is both chronic and progressive. 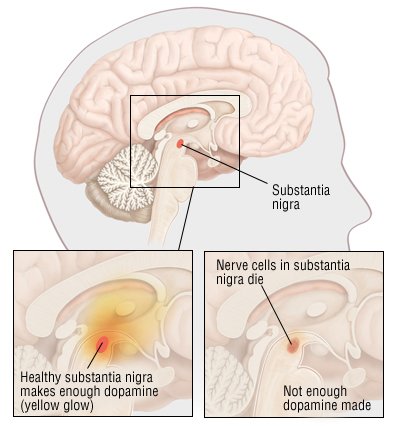 The mechanism by which neurons are lost in PD may be a results of the formation of Lewy bodies. Lewy bodies are the histological hallmark of PD. They are composed primarily of fibrillar α-synuclein-ubiquitin complexes that can not be directed to the proteasome for degradation. These complexes aggregate in neurons, forming Lewy bodies. Early in the disease, Lewy bodies appear in the olfactory bulb and lower brain stem. As PD progresses and becomes symptomatic, Lewy body deposition and dopaminergic cell loss occurs in the substantia nigra pars compacta (SNpc). The precise pathogenic pathway in which Lewy bodies cause cell death is not known. A common theory is that Lewy bodies cause oxidative stress, mitochondrial dysfunction, excitoxicity and inflammation. This leads to proteasomal dysfunction and improper protein metabolism, which promotes Lewy body formation. Neuronal dysfunctional and apoptosis follows in the progressive neurodegenerative process of PD.

The locus ceruleus and substantia innominata are also involved in the degenerative process. Advanced PD exhibits prominent non-dopaminergic features and the serotonergic, noradrenergic, cholinergic and GABAergic pathways are compromised. Neurons are lost in the cortex, subcortex, brainstem and other peripheral autonomic sites. It is the loss of these non-dopaminergic pathways that is the major cause of the non-motor symptoms of PD, including cognitive decline and autonomic dysfunction.

Recently, the role of mitochondria in PD pathogenesis has become apparent. In the substantia nigra of PD brains the activity of mitochondrial complex I is significantly reduced. Function is not reduced within other PD brain areas. Furthermore, all environmental toxins identified so far that cause parkinsonism are mitochondrial inhibitors of complex I.

Both genetic and environmental factors are involved in the pathogenesis of PD, with a small percentage of cases known to be hereditary. Environmental factors that increase the risk of PD include living in a rural environment and increased exposure to herbicides and insecticides. Smoking and coffee consumption are known to reduce the risk of developing PD. α-Synuclein gene mutation or multiplication can cause autosomal-dominant PD; mutations in the gene encoding LRRK2 have also been linked to late-onset and famililal Parkinson's disease. Both genetic and environmental etiologies share a common pathogenic pathway.

The main motor features that are characteristic of PD are mainly due to the loss of the nigrostriatal dopaminergic pathway. Pharmacological treatments of PD aim to improve symptoms by increasing dopaminergic stimulation or inhibiting cholinergic and/or glutamatergic stimulation. There are several ways to increase dopamine stimulation:

~Levodopa, a brain penetrant dopamine precursor, is metabolized to dopamine by dopa decarboxylase within the CNS.

The improved understanding of the etiology and pathogenesis of PD has enabled a range of compounds to be tested as putative drugs for neuroprotection. These target a number of different points in the cascade that cause dopaminergic cell dysfunction and death, and several have shown efficacy in vitro and in vivo. The implication is that those which are effective in slowing progression of dopamine cell death by interfering with biochemical pathways of damage will also be effective in slowing non-dopaminergic cell damage.